James Purcell, Quintet’s Group Head of Sustainable Investing, talks to Daniel Webb, founder of the Everyday Plastic Project, about pioneering a plastic-free future and building a Richer Life for everyone. There’s never been a better time to hit the reset button. Change is difficult, inconvenient and occasionally costly. But protecting the environment is a social, cultural, human rights and economic issue.

As individuals and organisations join the pledge for a Plastic Free July, Daniel Webb, founder of the Everyday Plastic Project, and James Purcell, Quintet’s Group Head of Sustainable Investing, discuss creating a sustainable future – and why exposing the human-side of our plastic problem is key to driving returns.

Although Dan and James are working towards the same plastic-free future, they approach the issue of plastic pollution from opposite ends of the spectrum. James works top-down, helping to embed sustainability at the heart of corporate investment philosophy, while Dan is on a mission to re-frame our plastic problem as a personal one.

For Dan it was a move to Margate, UK in 2016 that exposed the reality of our collective addiction to plastic. “It was my first time living by the coast and I really noticed plastic. It was strewn on the beach, in the sea, littered down the streets and I was shocked to find that my new town didn’t operate a recycling collection.”

The unavoidable plastic problem got Dan thinking about his own footprint and what it might look like if he collected every piece of plastic he used in the course of a year. The answer? Twenty-two bin bags full. Laid flat, his plastic filled a 2,000-person music venue. He knew he had an important (albeit uncomfortable) story to tell. He enlisted the help of earth scientist Dr Julie Schneider and together they spent three days counting, weighing, categorising and analysing each piece of plastic.

“To see the 4,490 pieces of plastic I had collected laid out in front of me was shocking. 93% of it was single-use (plastic specifically designed to be used just once before being thrown away), around 4% (161 pieces) would actually end up being recycled. More of what goes into the recycling box ends up being sent to other countries in the name of recycling, whilst 60% of what I threw away would be sent for incineration.”

Dan’s plastic collection eventually became immortalized in a piece of art. Having laid out all of the plastic to the exact size of the billboard, the piece was photographed by Ollie Harrop using a 5m high by 6m wide rig, and the items were captured at actual size, to make Mural-by-the-Sea in Margate, UK. The issue of plastic pollution is a familiar one, but it’s difficult to get people to engage because the message very often drives fear, guilt and makes people feel helpless.

Little did he know that his experiment would attract so much attention; “we turned a vast, intangible issue into something people could relate to, in the hope that it would encourage them to think and feel differently”.

“When individuals start to shift their behaviour, these actions, when taken collectively, put pressure on business. For example, we saw how impactful the 2019 climate marches were in prompting organisations to assess their carbon output and pledge to move their operations towards net zero.” 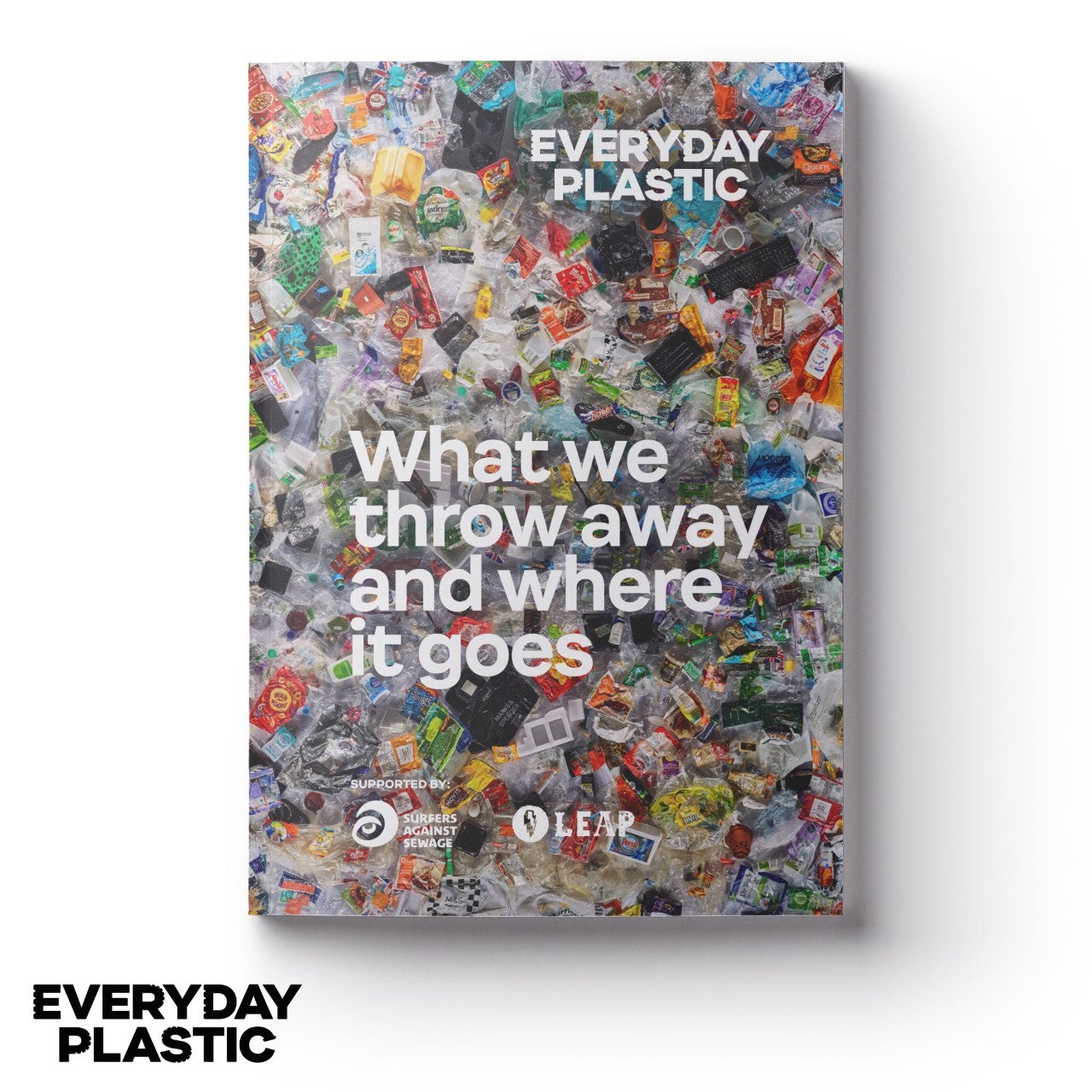 Dan now runs the Everyday Plastic Survey, helping individuals create their own plastic footprint, in just the way he pioneered in his original report.

Although James says he has seen an influx of funds flow into sustainable investments, the notion of ‘sustainability’ is most commonly associated with carbon emissions, leaving little room on the agenda for plastic.

“Climate, food waste, carbon emissions, the health of our oceans and plastic pollution are all interlinked. At a corporate level, the idea of a plastic footprint is completely missing. If we want to make a real change, we have to get better at acknowledging that it’s intrinsically connected to these other issues.”

Adopting environmentally responsible practices is quickly becoming a requirement for doing business in the investment industry. James explains; “when we place money with asset managers, we encourage them to ask questions and analyse the plastic footprint of the companies they are investing in. Our asset managers then help these companies understand where they can improve their processes to use less plastic. Simultaneously, we look for ways to save them money. It’s how, as an investor, we use our weight to have a positive impact and enact incremental change".

Taking a footprint of single-use plastic at their headquarters in Luxembourg, exposed some hard truths. 170,000 plastic cups and 50,000 stirrers were just the start. Even so, he’s proud to say that this figure has now been reduced to almost zero. “For Plastic Free July, we committed to eliminating single-use plastic across our 50 offices and will continue to make steps to reduce our footprint as we go.”

These kinds of commitments are undoubtedly a step in the right direction. Other household names, like Unilever and Aldi, have similarly pledged to prevent millions of pieces of plastic from being thrown away.

But despite the shift toward sustainable investment, producing virgin plastic is still the default because it’s cheaper than using recycled plastic.

James adds: “It’s very difficult to get corporations to go against their commercial obligations and do what’s right”. However, companies can be very open to change and innovate “where self-interest aligns with business interest”. This he says, is the key to making transformation happen quickly.

Sustainable investing is rooted in the idea of investing in progress while at the same time, avoiding investment in businesses that can’t or won’t proactively adapt.

Where then, do the pair see the greatest opportunity?

For James it’s innovation in the circular economy.

“We see some companies jump straight to recycling, but that doesn’t have the biggest impact upon plastic reduction, and its rarely revenue accretive. The real opportunity is to rethink, redesign and substitute. Some of this will be driven by regulation, but most will be driven by consumer demand,” he says.

Dan agrees, “we can no longer hide behind the myth that we can recycle our way out of this crisis. There’s no way of making current levels of consumption ‘environmentally friendly’. Instead, I would like to see corporations commit to redesign as well as reduce, reuse and refill initiatives”.

There’s never been a better time to hit the reset button. Change is difficult, inconvenient and occasionally costly. But protecting the environment is a social, cultural, human rights and economic issue. Dan has demonstrated that each of us has the opportunity to improve society and the environment, while James has shown there is a strong economic argument for creating a sustainable, and ultimately richer future.